This is cross-posted in the National Forum on Youth Violence Prevention June 2014 newsletter. See the original post here (PDF, 6 pages). 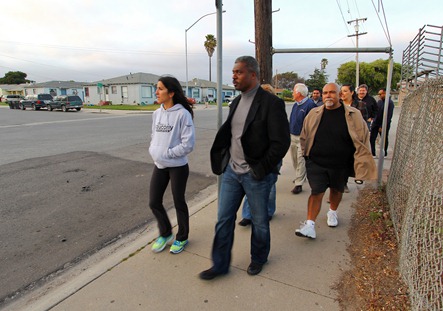 Community and faith leaders refuse to turn their backs on the most dangerous neighborhoods of Salinas, Calif. These residents are standing up—walking, in fact—for parts of the city that many others have dismissed. They are fighting gang violence without weapons, without patrol cars or prison bars. And they're doing it after sundown, when crime is at its peak.

Night Walkers have become a strong presence in communities struggling with poverty, drugs, and violence. Cities such as Boston, Mass., and Sacramento, Calif., have led these "walks for peace," a crucial part of the Ceasefire antiviolence effort, for years. So when the number of fatal shootings rose in Salinas's eastside neighborhoods, reaching the state's highest homicide rates among 16- to 24-year-olds, the city decided to tackle the problem with partnership and good will.

Night Walks are a widely supported effort, led by Salinas's Community Safety Manager José Arreola and Julia Nix, who help facilitate the Community Alliance for Safety and Peace (CASP), and other faith and nonprofit community members. Together, they have joined with the Monterey Institute of International Studies, the Naval Postgraduate School, and California State University of Monterey Bay in a "collaboration between business, the faith community, education, and government," said Dick Renard, ministry coordinator at Marketplace Meets Mission in Salinas.

The walkers are small groups of churchgoers, pastors, deacons, families, and community members—with at least one fluent Spanish speaker—who meet three or more times a week. From about 6 p.m. to 12 a.m., they walk through known hot spots such as Acosta Plaza, Del Monte Avenue, and Hebbron Heights (where violence rates have dipped), talking to residents in an effort to build trust and relationships. Walkers wear white windbreakers and carry cards with a list of services available to the community by dialing 2–1–1. Each group is trained so they know how to best interact with community members and police as they determine what resources are needed.

"We're very confident that it's strengthening the community," Salinas Police Chief Kelly McMillin told the Monterey Herald. "And stronger communities are better able to withstand violence." Youths are responding in a positive way, expressing gratitude for the outreach. Although not everyone is on board with the Night Walks, most feel they are a heartfelt effort to turn the violence around—a first step in a process to increase interaction and build strong community relationships. Neighborhood residents see the familiar faces of walkers who come back week after week and month after month, and understand this isn't just about charity.

"The walks are not about conversion," said Renard. "It's about building a community of peace. We're hoping neighbors feel they live in peace and are not trapped in their circumstances."

There are other efforts to revive Salinas, such as Tatum's Garden, the first Monterey County playground designed specifically for children with disabilities. And city officials continue to attend biweekly meetings with CASP, where they discuss sustainable antiviolence strategies with law enforcement leaders and department heads.

Walkers Return Even After a Shooting

"We are seeing a reduction in violent crime," said Renard. "Aggressive behavior is going down, there are fewer kids in juvenile [detention centers]... and we've seen a change in atmosphere. In summer, kids are out playing, families are talking on the front stoop. People's friendly attitudes are on display as we pass by."

Nothing deters the walkers, who keep the faith, even after a shooting. They often return the following day, with more volunteers in tow.

Soon, Night Walks will begin in nearby San Jose, California's third-largest city. "We've got to collaborate," said Renard, "to become each other's cheerleaders for best practices."