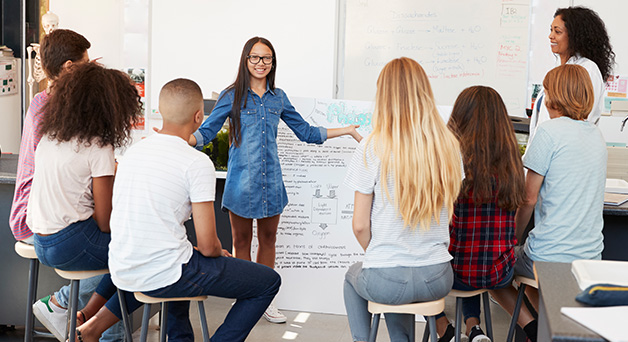 “Representation matters,” says Ramiro Vazquez, Jr., the Director of Youth Engagement for the Minneapolis Youth Congress (MYC), a youth governing body of more than 50 young people, ages 13 to 19, from across the city who weigh in on policy decisions that impact youth. MYC members regularly interact with and advise city elected officials, public school leaders, the city’s Parks and Recreation Board, library staff, and police departments.

MYC was founded in 2007 by the Youth Coordinating Board (YCB), an intergovernmental organization that brings together city and county elected officials, the parks department and public school system to align policies and activities that impact Minneapolis children and youth.

Since then, MYC has helped drive tangible changes in local policies and community practices, proving that its motto, “no decision about us without us,” is not just rhetoric.

Vazquez is one of a handful of adult coordinators with MYC. He and his adult colleagues believe that lasting positive community change requires more than just consulting with young people. It means engaging them in shaping the work and letting them make the decisions that will affect them—including having a say in who is hired for full-time coordinating positions with the Minneapolis Youth Congress.

“We make it a point to hire staff who have a youth development or community organizing background, can speak to young people, and really understand that this is a partnership,” Vazquez says.  “Our coordinators identify with all of our student population, from East African to African American to Latinx and Native. Members are able to see adults who look like them and went through the same experiences in Minneapolis and are now successful.”

The full Congress meets six times a year. Committees working on specific issues in the community—ranging from health, education, housing and transportation to the environment and safety—meet twice a month at a local library.

Vazquez describes MYC’s structure as “unwavering in its mission yet flexible in its means,” to authentically prioritize the needs, desires, and concerns of its young members.  Adult staff help recruit young people to join the Congress, and help identify opportunities for action in the city, but they do not make the decisions about which issues to focus on or which solutions to propose. The MYC members make those calls.

That’s what sets the Congress apart from typical programs that serve young people says Gisell Ayala, 17, who has been a Minneapolis Youth Congress member for three years. “Everything is youth-driven,” she says. “The coordinators are there to facilitate and help us, and give us the resources we need in order to make the change that we want.”

In addition to training and support to understand policymaking and local issues, MYC provides its youth leaders with food and transportation, and pays them for their work. Some of the resources are less tangible: “MYC is a safe place to talk about issues that you're passionate about, and feel you'll be heard, no matter what,” Ayala says. She describes it as “like a second home to go to after school and decompress.”

Unlike other comfortable places however, it is a place where you can make change happen.

Ayala is part of the committee focusing on health and wellness in Minneapolis. Her committee played a key role in the city’s Tobacco 21 Ordinance, which passed unanimously in 2018, making it illegal to sell tobacco products to anyone under age 21.

In 2017, MYC members surveyed their peers about tobacco use. They took their findings directly to the City Council, where they gave testimony on how they and their peers view the industry intentionally targets black and Native American communities in Minneapolis. City Council members have publicly credited the young speakers and their testimonies as an important reason behind the law’s passage.

“The bulk of my job is getting adults to realize the best ways that they can walk into a space when they're about to engage with young people,” says LaToya Balogun, Director of Youth Engagement for the YCB, and an MYC coordinator. “How do you as an adult sit and listen to folks who aren't degreed individuals, who are 16- and 17-year-olds? It's about talking less, listening more. The way we operate with our young people is that they're given full rein to be able to control the conversation, to be able to push back, to be able to ask really critical questions.”

In May 2019, for example, MYC facilitated a dialogue with the mayor and the chief of police chief, structured around five questions, crafted by MYC committees to address their key priorities. The process required everyone to get out of their comfort zones, especially some young members of color who had not always had positive experiences with police in their communities.

For Gisell Ayala, being supported in challenges like this are a key benefit of being an MYC member. “Something that I learned from facilitating things is that when you go into anything new you hadn't tried before, you kind of have to be open-minded and be able to make change happen if it's needed.”

Before joining MYC, Ayala considered herself a shy person, someone who couldn’t imagine speaking to large groups or leading activities. The MYC has helped her to find her strength and voice. “It also has helped me stay motivated and want to do well in school and learn more, which I think plays a big part in why I want to continue further on my education in the future,” she says.

Measuring the Impact of Youth-Adult Partnerships

For the 2018-2019 school year, MYC had a 100 percent graduation rate among the high school seniors who have been part of MYC—an impressive data point by any measure. Yet while the program tracks traditional measures of success, such as grade points or graduation rates, it is up to the young leaders to define the success measures that mean the most to them.

When the MYC first launched, an evaluation team came together to set up a five-year plan for the program. As LaToya Balogun explains, the young leaders shaped that process. “They decided everything from input to output, the cost of programming, and what our measures of successes look like.”

MYC is steadily evolving and better serving young people, “because we’re constantly listening to them and what they say they need and want,” she says.

One recent example: MYC staff received training on gender and pronouns. It came at the request of the young members. “They articulated their need for coordinators to receive some training, to help us have really authentic conversations with young people,” says Balogun. “[Most of us] are Millennials, so a lot of things that we're now talking about didn't exist for us 10 years ago, in terms of language. And it has helped us be aware of where young people really are in their thinking.”

Another example came early in the life of the MYC. In 2010, more than 50 members of the MYC participated in a pilot project with Metro Transit, the primary public transportation operator in Minneapolis–Saint Paul. For two years, they provided real-time feedback about public transit from the diverse perspectives of local young people, many in communities with limited access to transportation.

The input from the MYC helped spur Metro Transit to partner with the Minneapolis Public School District to provide students with free access to public transportation to get to and from school and beyond. The Go-To Pass program was born.

Today, all seven public high schools in Minneapolis provide students with Go-To Passes. Students no longer have to rely on the traditional school bus system to get to school, or struggle to find ways to get home from after-school programs that end after the school busses leave.

If Ramiro Vazquez has learned anything from the young people he has worked with, it is to avoid having specific expectations for them, and instead listen to how they define success for themselves. He thinks that all adults, especially those who work with young people, could benefit from that thinking. “Don't undersell them or oversell young people, because they're capable of pretty much anything. They're always going to surprise you,” he says.