Every day, stories of brutal violence perpetuated and experienced by youth capture the attention of our communities and serve as powerful reminders that more must be done to ensure the safety and health of our young people. The Forum was created by the Obama Administration in recognition of and response to this continued challenge and concern. 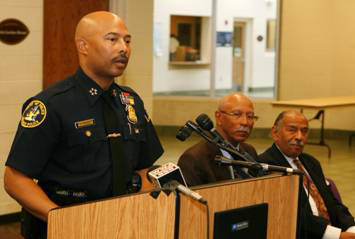 Planning for the Forum began in late 2009, with the Departments of Justice and Education leading the development of the initiative. In January and February 2010, a small number of cities—Boston, Chicago, Detroit, Memphis, Salinas and San Jose—were invited by the Obama Administration to participate in the Forum on the basis of need, geographic diversity and willingness and capacity to engage with a federal interagency effort relating to youth and gang violence. Rural and tribal representation was also considered.

Beginning in May 2010, listening sessions took place in each of the selected localities so Forum participants could learn about the challenges they face in preventing youth and gang violence. Interagency federal teams heard the experiences of local leaders, stakeholders and youth, and engaged with them in a candid dialogue about the youth violence issues and strategies they employed.

As listening sessions continued, the Forum’s federal team began to plan an initial Working Session to be held in Washington, D.C. The session would be the official launching point for participating localities to begin development of their youth violence prevention plans, and would continue the candid federal/local dialogue begun with the listening sessions.

Representatives from multiple federal agencies came together to discuss the progress to date, lessons learned from previous initiatives, and ways those lessons could be applied to improve the coordination and sustainability of efforts in the participating localities. Participating localities identified leaders to spearhead the development of comprehensive plans that would blend prevention, intervention, enforcement and reentry strategies.

In October 2010, the first Forum Working Session was held in Washington, D.C. Over the course of two days, participating jurisdictions discussed current efforts to prevent youth violence and explored ways to improve them. Federal and local experts offered information on evidence-based and data-driven practices. Representatives from federal agencies partnered with localities to explore how existing federal resources could be identified and better coordinated in support of local efforts.

Based on the information shared at the Working Session, participating localities began the work of developing or enhancing their youth violence prevention plans.

While planning, participating localities engaged in peer-to-peer learning, developing their plans in collaboration with one other and with federal interagency teams who provided technical assistance as needed. Written guidance and monthly conference calls helped to further sustain planning momentum. Prior to the submission of the localities’ final plans in March 2011, each locality received written and oral feedback on drafts from a panel of federal experts. 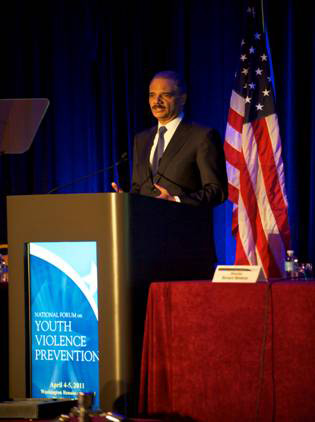 In April 2011, the Forum hosted the Summit on Preventing Youth Violence in Washington, D.C. For two days, the local leadership, including mayors, presented the localities’ comprehensive plans. Private, state, and local funders discussed promising practices as well as opportunities for localities to secure additional funding for their efforts. Senior leadership from across the Administration participated, including Attorney General Eric Holder, Secretary of Education Arne Duncan, Surgeon General Dr. Regina Benjamin and Senior Advisor to the President Valerie Jarrett. Members of Congress also attended the summit and offered their support. Portions of the event were open to press in order to showcase the localities’ efforts, and each locality received favorable media coverage.

Federal interagency teams conducted site visits in Boston, Detroit, Memphis, Salinas and San Jose from August 2011, through September 2011, to view the implementation of the localities’ comprehensive plans firsthand. The visits included meetings with a wide range of stakeholders including mayors, police chiefs, U.S. Attorneys, steering committees, faith- and community-based groups, law enforcement officers, youth, and business leaders. Each site visit included tours of the implementation target areas in each city. Technical assistance was provided and discussed in key policy areas and tailored to local needs. At the conclusion of each visit, the federal teams debriefed local leadership on the continued implementation of their comprehensive plans.

On October 31, 2011, representatives from Forum localities returned to Washington, D.C., for another Working Session. Unlike the summit and the initial session that were focused on plan development, this meeting focuses on the progress each city is making and the challenges they face in implementing their comprehensive plans. In particular, this session brings together federal and local experts to discuss how Forum localities can continue to build the necessary multidisciplinary partnerships needed to move their plan forward. Additional topics include how to effectively implement evidence-based prevention, intervention, enforcement, and reentry approaches. Afterwards, Forum members will return to their communities to apply the lessons learned at this session to continue the exchange of information and sharing of ideas with their peers and fellow Forum members around best practices.