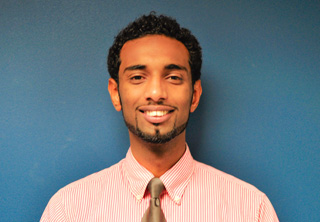 Abdalla: Non-Traditional Paths to Career Preparation
"My advice is to get involved with Year Up or a program like it."
We spoke with Abdalla via phone and email in May and June 2015.

Abdalla E., 25, is an alumnus of Year Up National Capital Region. While in Year Up, Abdalla spent one year in an intensive training program for low-income young adults, ages 18-24. Abdalla received training and mentoring in information technology (IT), accessed case management services and support networks, earned college credits, and took part in an internship with the National Aeronautics and Space Administration (NASA) — all at no cost to him! When the traditional path to college didn’t work out for Abdalla, he found a path that did work. Below, Abdalla shares his experiences in the Year Up program, including his internship with NASA and the beginning of his professional career.

I was set to attend college when my aunt became gravely ill. We are a close-knit family, and my aunt was one of my only relatives in the United States. She played a very significant role in my life. As a result, I made a tough decision to withdraw my college acceptance in order to care for her. I didn’t want to give up on my education, so I enrolled in a nearby community college and picked up a job that paid minimum wage. I was struggling to make ends meet.

At that time, a friend told me about Year Up, a program in which he had participated. I intended to major in engineering in college, and I've always gravitated toward mathematics, problem-solving, and troubleshooting — all of which are applicable to the field of IT. I enrolled in the Year Up program and was taken aback by the IT and professional skills instruction I received. As part of the program, I rebuilt computers, dissected the motherboard, learned about hardware and software components, and set up computer networks. I interned as a SharePoint Administrator in the office of the chief information officer for NASA. Everything I had learned in my Year Up training came back to me and proved to be very beneficial during my internship.

After graduating from Year Up, I got a job as a Security Analyst, contracting for the United States Agency for International Development (USAID). I spoke to USAID about my internship and experiences at NASA, which really boosted my chances of landing a job. In the future, I plan to further my experiences in the information systems and security field, and hopefully, start my own consulting company one day.