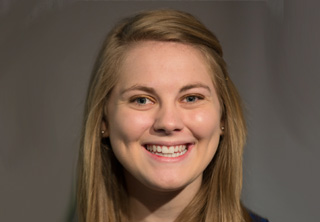 Carrie: Believes in the Power of Youth

We spoke with Carrie via email in May and June 2014.

Carrie S., 20, was named National Student of the Year by Students Against Destructive Decisions (SADD) and served as an intern with the U.S. Department of Transportation (DOT). She is now a junior at the University of North Dakota, pursuing a double major in communications and international studies. Carrie shares her experiences working to promote safe driving among teens and her belief in the power of youth voice in government.

I’ve been involved with SADD for eight years now, ever since I decided to attend an informational meeting in seventh grade. Joining SADD turned out to be one of the best choices I’ve ever made. I was involved at the state level throughout my high school years and, eventually, was named the National Student of the Year by SADD during my freshman year of college.

In the years since I first became involved with SADD, I’ve had many opportunities to participate in government. While in high school, I had the opportunity to serve as an inaugural member of a youth advisory board for “Think About It,” a peer-to-peer education program from the North Dakota Department of Transportation. When I was a junior in high school, I was blessed to be involved in the passing and signing of North Dakota’s ban on texting while driving and a bill that strengthened the state’s driver’s licensing legislation. These early experiences and hands-on involvement showed me the power of youth voice in government and encouraged me to seek further involvement with the bodies and agencies that help improve the safety of people.

During the summer after my freshman year of college, I took my interests to the next level. As part of my duties as the National Student of the Year for SADD, I participated in an internship with DOT. For a born-and-raised North Dakotan, the idea of spending a summer in Washington, D.C., was thrilling. After a few weeks on the job, I also learned how meaningful the work is. While at DOT, I had the opportunity to go to countless meetings on a wide variety of topics. The education I received about the government’s internal operations and how it interacts with outside organizations helped shape the way I now view our federal system.

SADD is based on the idea of peer-to-peer education and support. While interning at DOT, I applied that philosophy to my work for the government. The most valuable experience I had was giving my input on projects and campaigns geared toward youth. This was important to me because, as a young person, I related on a much more personal level to the content being considered. Youth voice is essential to solving youth problems and, while interning at DOT, I had the opportunity to add my voice to the mix of officials and professionals who were working on issues that directly impacted me. And that’s definitely something I believe in.