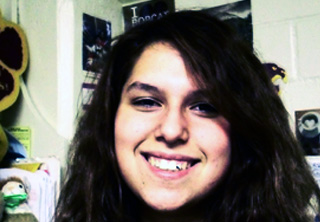 "Education is power" is my motto. I’m on my way to being as successful as I hoped for and it was all because I had the opportunity to go to school, and the resources to stay in school. I plan to go so much further, too, because I'm tired of being…

Irene, 20, is a junior at Texas State University. In 2012, for demonstrating high academic achievement, Irene was chosen to be a National Association for the Education of Homeless Children and Youth LeTendre Scholar. Irene experienced homelessness at various points throughout her life. We spoke with Irene about her experiences being homeless and how it inspired her to advocate on behalf of homeless youth.

My name is Irene S. I’ve been homeless on and off since the age of five. My mother dropped out of high school in tenth grade, which I feel contributed greatly to the reason why we were homeless. She raised my sister and me as a single mother and had to work all the time while my sister babysat me.

We lived in Colorado for the first five years of my life, but I was born in San Antonio, Texas, so my mother, older sister and I moved to San Antonio to be with the rest of our family. Growing up in San Antonio was quite difficult. As soon as we arrived, my mother asked a family member for a place to stay. She needed time to find a job for herself and an elementary school for me. My sister was old enough to get her own job and begin living her own life, so that's exactly what she did. Eventually, the family we were staying with began to grow and my mother knew it was time to give them their own space back. We felt somewhat intrusive, as we did for most of the others we stayed with. The people we stayed with usually already had their own family, but still had the heart to offer a whole room to my mother and me.

My mother was great with keeping me in school, but not so great at staying in one place, and keeping a job. This was because my mother found out that she was a diabetic when I was in the second grade. The next school year, we found out that I was also diabetic. She fell ill quite a bit, and so did I. We were new to this disease, so we didn't quite know how to control it like we do now. Most minimum wage jobs expect a doctor’s excuse if a day is missed. For my mother, that was difficult. She never learned how to drive, so we stuck to public transportation, but for a woman who is ill, public transportation is just not safe. I remember feeling so helpless knowing that my mother, the woman who'd kept me healthy and up to date with shots and other records was sick and I could do nothing. By the fifth grade, I'd been to seven elementary schools, and my mother had worked a handful of jobs. The last person we stayed with lived in the “courts” which are like the scum homes of government housing. They got evicted because we weren't on their lease. We got someone kicked out of the courts. After that event, my mother felt so bad about what we'd done that she decided it would be best if we were on our own instead of hurting others.

We moved to a local homeless shelter and I feel that was the best decision my mother made. The shelter provided so much information about the services that were available to us. They even offered my mom a job as a receptionist in the front office of the shelter. They helped us get transportation services which made it possible for me to stay in the school I was attending. The shelter case workers helped all of the families who lived in the shelter find an apartment in a complex in a really nice part of town at an extremely discounted price. After the lease was up, my mother had worked enough as a receptionist that we could now afford our own apartment.

After two and a half years of successfully staying on our feet, my mother fell ill. Her liver had become inflamed and she was hospitalized for a month. She lost her job and we lost our apartment. For a whole month I lived with friends that I’d gotten to know over the years. After that month, we had to move back into the shelter. My mother was told that she wouldn't be able to work ever again. This news threw my mother into a depression because she knew that she could no longer support herself, much less her daughter. The shelter, once again, provided the resources for us to move into an apartment complex that wanted only a fraction of our total income, and helped us with transportation. Luckily, my father had begun paying child support a few years earlier so we had an income. We lived there for two and a half years.

Moving from school to school made me slower than the other students because of all the different teaching techniques I'd been exposed to; some teachers even thought I was dyslexic. It wasn’t until high school that I found out about the McKinney Vento Homeless Education Assistance Act, which allowed me to stay at the same school despite the uncertainty of where I’d reside. Despite the frequent transitions, I made it all the way. I graduated from high school, ranked number 7 in my class. I am in college and plan to go so much further, too, because I'm tired of being homeless. “Education is power” is my motto.

My experiences inspired me to become an advocate for other homeless children and youth. Through an educational scholarship I received from the National Association for the Education of Homeless Children and Youth, I met other youth like me and had the opportunity to share my story with members of Congress.

Last year, I took part in a congressional briefing on homeless children and youth sponsored by the Congressional Children’s Caucus. Then, I also became an advocate for homeless children by coordinating a Youth Task Force in San Antonio for the National Association for the Education of Homeless Children and Youth, and I spoke on behalf of female leadership for the Girl Scouts. I’m on my way to being as successful as I hoped for and it was all because I had the opportunity to go to school, and the resources to stay in school.