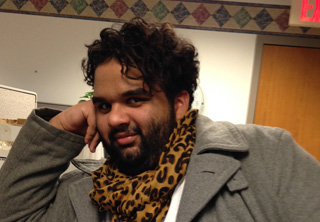 "I’m trying my best to change misconceptions about gay people."

We spoke with Josh via telephone and email in September, October, and November 2013.

Josh is an eighteen year old student advocate in Hartford, CT. He is passionate about changing misconceptions about what it means to be gay.

The first time I recall feeling excluded for being gay was in my ninth grade health class. My teacher told me to leave the classroom because they were going to discuss heterosexual behaviors. I could not believe what I heard. I felt left out. She told me that gays shouldn’t care about their sexual health, and that they were going to die anyway. I felt embarrassed and angry that my health teacher thought it was okay to say that to me as if I didn’t care about my life and the responsibilities that come with it. Additionally, I felt disappointed in the school system, my health teacher, and my peers for not caring about my sexual health because I chose to be openly gay. I responded with curiosity and anger as to how a teacher could sit there in front of me and my peers and say something like that. When I confronted the teacher about her statement, she said, “I am speaking the truth. Why would you really care about your sexual health in the first place?” I didn’t understand why I was being treated that way. To this day, I wonder why my teacher said what she did.

I wasn’t the only gay student in my school, but many of the teachers treated me as if I was the only one. I assumed they knew that many of the misconceptions they had about gays aren’t true. One time one of my teachers said gays are the only people that get AIDS. I responded with disbelief and politely told my teacher how wrong her comment was and asked her to please take back what she said. I couldn’t walk away from this; I had to say something before my teacher filled my peers’ heads with those lies. I knew what she was saying was wrong and I could not have lived with myself if I had let her continue telling those lies to young people. In that moment, I knew I had to get myself involved in something that would help me spread the truth about being gay and change people’s perceptions of what it means to be gay. I hoped what I had to say would change things for the better and change the views of the people who had brought me down.

My experiences being excluded because of my sexual identity have helped me become a voice for the Lesbian Gay Bisexual Transgender (LGBT) community. I have had the pleasure of spreading positive messages that help people understand where the lies end and the truth begins. I’m trying my best to change as many things as I can about the views and misconceptions about gay people. I take my experiences with me and try to make sure not one person feels the way I was made to feel.

There are many things that school systems and after school programs can do to make young gay youth feel more comfortable and good about themselves. Some examples are to put community outreach programs in the school system, mostly in the high school; to make everyone aware that your health is important no matter what your sexual preference is; and to encourage youth to be comfortable in their own skin. Another idea is to have clinics in the community sponsor LGBT events where young LGBT members can come out and get tested and become aware of their sexual health. It takes a village to raise a child and you cannot raise a child without him or her knowing their sexual health regardless of sexual preference.