Help us learn what works! What does your organization do to authentically engage youth? Click here to share. 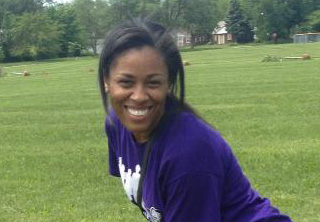 Kayla: Youth-Adult Partnerships
"When I look back at my past experiences, it amazes me what a youth from South Central [LA] was able to accomplish. I enjoy giving other youth the same feeling."
We spoke with Kayla via email in November and December 2013.

Kayla is the director and lead organizer of YOUTH VOICE, a project of the Harriet Tubman Center in Detroit, Michigan. YOUTH VOICE is an organization that assists young people to build their collective power by developing campaigns for community change with the support of an adult organizer. A graduate of the University of Michigan School of Social Work, Kayla shares her experience as a youth organizer since the age of 15, addresses why youth empowerment matters in all social service fields, and reflects on YOUTH VOICE efforts to civically engage young people in Detroit.

What inspired you to become a youth organizer with YOUTH VOICE?

I often tell people, “I wasn’t inspired to be a youth organizer; the field found me.” I was a resident of South Central Los Angeles, a community of low-income people and a place where many of my peers dropped out. But I took classes at a community college while in high school and received my associate’s degree with my high school diploma. I was 15 when my Sociology professor used me as an example in a lecture about youth from South Los Angeles being lazy. He told the class, “Kayla is the only high school student in class at this time when others can be here. Only one high school student is taking advantage of the opportunity to take college classes because the rest are lazy.” In that moment, I was very agitated and shouted in class that our community, rather than lazy students, played the biggest factor in why more high school students did not participate. How did our society expect teenagers from disadvantaged areas to realize their potential if no one in the community empowered them to realize their potential? My professor was not satisfied with my outburst and told me that if I felt passionate about the issue I would be at the Los Angeles Community Coalition involved with changing unjust school structures.

I took his advice and for the next 3 years became a devoted member of South Central Youth Empowered through Action (SCYEA). SCYEA is a youth leadership development program from the Los Angeles Community Coalition that brings African-American and Latino students together to improve their schools and communities. I was a part of a 6 year campaign that in 2005 pushed the Los Angeles Unified School District (LAUSD) School Board to pass a curriculum that increased college access for thousands of South LA students. Being a community activist as a teenager was the place I found my voice and realized youth should use their voice if they want to see change.

When I entered college at California State University, Dominguez Hills in 2007 and discovered that budget cuts were affecting students and faculty, I knew I had the power to make change. I was a student organizer for the California Faculty Association (CFA) for the next two years. I conveyed to state legislators the importance of education by helping plan direct actions to stop the deficit and the underfunding of CSU. Actions included collecting student signature petitions and faxing them to legislatures, rallying outside of the governor’s office, and planning 24-hour vigils in front of the CSU chancellor’s office. I also made presentations to classes weekly on fee increases, overcrowded classes, and class schedule cuts which could result in extended graduation dates. Through CFA’s efforts, students and faculty helped restore $305 million back into the CSU system in 2008.

When I look back at my past experiences, it amazes me what a youth from South Central [LA] was able to accomplish. I enjoy giving other youth the same feeling.

What should adults developing youth empowerment programs and services know in order to be more effective?

It is important that adults developing youth empowerment programs establish a structure for youth to identify issues and develop solutions to their concerns. YOUTH VOICE has been very successful in using such a model since 2009. We were on CNN with Detroit Mayor Bing, selected for MTV True Life about improving urban blight, and helped the city of Detroit get awarded $1.5 million for a youth violence reduction program called Ceasefire, among other accomplishments. But these successes were only possible because YOUTH VOICE engaged youth in all aspects of the organization. Young people should be a part of the policies and practices of everyday operations. For example, youth leaders can offer advice on how to establish boundaries in the organization or how to lead a training topic. In my experience, it was transformative to learn that sometimes youth solutions were better than my own ideas and I learned that was okay.

Adults should also demonstrate that they respect youth voice. Often times, adults participate in adultism, a discriminatory practice that limits youth opportunities to feel empowered because they are not adults. This can occur in ways you don’t think about like a door that is labeled “No Students Allowed,” or “Directors Lounge” or “Staff Training Room.” These all give the same impression of inequality. When youth feel like adults respect their opinions, they are more likely to be committed to a program as a team player. Adults might not necessarily see youth as colleagues, but youth should not feel less than adults. It is easier said than done and even I struggle with this philosophy at times.

I also suggest youth advocates research the field, learn how youth empowerment work is being done in other states, and develop something that works for the local community. After working in Detroit for the last three years, the model we developed integrates supportive services, cultural literacy, volunteerism, and civic participation. It is a model that provides support for young people who may not have the resources needed to support themselves. The model is based on Shawn Ginwright’s (http://www.shawnginwright.com/) work that youth success occurs in the developmental domains of civic development, psychological wellness, and supportive adult systems. It is our goal in Detroit to acknowledge youth assets, build on their skills, and empower them to become pioneers in their lives and community.

What advice do you have for youth who would like to work with adults in developing youth programming?

The first step is always open communication. A lot of adults are not trained to respect teenager’s ideas like their own so it is important [for the youth] to not assume the worst. I tell youth members in my program all the time that I might argue with them, but I cannot argue with evidence whether it is statistics, surveys, interviews, etc. So when YOUTH VOICE members want to change or implement something in our organization, they begin collecting data and doing their research to ensure a fair process. I also suggest finding a mentor or someone in the organization the youth respects. While youth have a powerful voice, having a strong adult ally behind them could accomplish the goal faster.

To learn more about the work we do in Detroit, visit http://www.tubmanorganizing.org/youth-voice-122.html

"Change starts with one person and can grow really fast." - Tristan