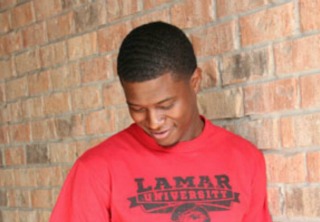 Kendall: Advocate for Children of Incarcerated Parents and other youth overcoming adversity

What I've learned out of life is this: Forgiveness opens up your heart so it can receive more love.

We spoke with Kendall via phone and email in September 2015.

Kendall T., 20 years old and recent graduate of KIPP Sunnyside High School in Texas, shares his story of resilience, progressing from an angry child with incarcerated parents to a proud high school graduate and youth advocate.

I am a product of resilience. Webster's Dictionary defines resilience as the ability to return to the original shape after being pulled, stretched, pressed, and bent. I tell you that I've been pulled, stretched, pressed, and bent, but never have I been broken. Some of my early difficulties as a youth were experiencing the foster care system, having a parent who suffered from mental illness and drug abuse, and being a child of incarcerated parents. These experiences made me a very angry child who cared little. I was so angry that I was kicked out of school and forced to attend an alternative school where no learning was going on.

When I thought that "hope" didn’t know my address, something special and necessary happened in my life. My grandmother gained custody of my sister and me, finally giving us a stable environment. In this environment, I was able to learn and grow. With the support of my Aunt Mary, one of my biggest cheerleaders, I started feeling like a kid who was loved, supported, and protected — a role that until then had been so unfamiliar.

When I went to live with my grandmother, I was going into fifth grade and started attending the neighborhood school. The idea of another new school was very intimidating. Would I be accepted? Would I be teased because I failed grades twice? I was worried about those things.

I recall going with my family to an open house at the school. There, I was introduced to a new program called the U.S. Dream Academy. This was the first year for the program at the school. The director of the Dream Academy talked about how the organization focuses on children of incarcerated parents and children who were failing academically. I was both, so my grandmother and aunt signed up me and my cousin for the program. After being in the program for only a few weeks, I noticed that I was surrounded by loving adults who weren't interested in hurting me or abandoning me. In my past, adults had failed me and left me unprotected.

Also, I saw men that looked like me being positive, working and volunteering in the program. One of those mentors was Coach Walter. Coach Walter taught all the students in the Dream Academy about social-emotional intelligence. Social-emotional intelligence is the ability to monitor your emotions and those of other people. As a young black boy, no one had ever focused on developing those skills in me. Focusing on developing my emotional vocabulary helped me to look at all of the pain I had endured and to build a new relationship with it. The primary tool I needed for this new relationship was to understand the power of forgiveness. I had to get to a place of learning how to forgive myself for feeling hopeless and to forgive the adults who had failed me.

Another great thing about the Dream Academy was the mentoring component. I didn't know much about a mentor but knew I wanted one. During that year, I was matched with a cool, laid-back brother named Jermaine Patterson. We instantly connected, mainly because I'm a laid-back brother as well. Jermaine and I have known each other for eight years now, and I consider him part of my support system. My other mentor, Coach Walter, is still by my side.

In addition to learning how to express my feelings, ideas, and concerns, I also learned to take school seriously. The mentors taught me how to be accountable for my learning. I completed my homework every day. The program allocated time for studying for tests, and I learned how to be internally motivated to do well academically. My grades changed drastically in one school year.

With the support of KIPP (Knowledge Is Power Program), the U.S. Dream Academy, and my family, I have learned so many things that I need to be successful, such as organizational skills, professionalism, empathy, love, and a strong work ethic. There were times when I thought I couldn’t meet the expectations that my KIPP teachers had for me. At KIPP, there was always homework to do, a test to study for, and a question to answer in the classroom. Through these challenges, the Dream Academy was right there. Coach Walter met with my counselors, checked my reports cards, attended my school events, and communicated important information to my family.

By leaning on my community, I not only survived, but thrived at KIPP. I wasn’t defeated by challenges, and I learned to push through them. I don’t proclaim that I am a perfect student or person. I make mistakes — a lot of mistakes — but I know that mistakes and failure are part of growth. Through every failure, there is a lesson that should be learned. KIPP broadened and molded my mind academically. You see, my story, although filled with challenges, is one of resilience, grit, and determination. For the past eight years, I had my family, my mentors, and my school. This is how youngsters let their light shine brightly. I know that I must pay it forward in gratitude, be responsible in my community, and give back through mentorship and community activism.

Now, I want to share a powerful moment for me. My mentor would always say "one day when you're ready, you’ll need to forgive your mother." I understood but wasn't ready to do that at the time. However, two summers ago, I wrote a letter to my mother who was in prison at the time. In that letter, I forgave her for everything that I had endured in my youth. After sending that letter, I never felt more free and light in my life. I realized at that moment I was becoming a healthy young black man. When I told my mentor about what I did, he respectfully said, “Brother, that’s powerful . . . you just taught me a powerful lesson.” What I've learned out of life is this: Forgiveness opens up your heart so it can receive more love.

From my experiences, I've become an advocate for teaching emotional intelligence to black boys and other minorities, an advocate for being responsible in your community through mentoring, and an advocate for supporting young people with incarcerated parents. With the support of my family, my mentors, and my team at KIPP, I know I am ready to go "to and through" college. I am now a freshman at Lamar University in Beaumont, TX. I’ll major in Sociology, with an emphasis in Communications. I eventually want to earn a master’s degree and publish research. I want to be an advocate for young people who may share my story and who need people, like I did, to support them on the road to success.