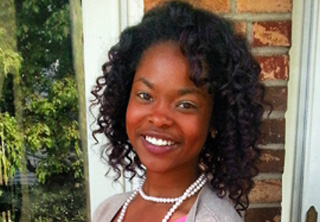 "Being an advocate for teen pregnancy prevention is an important part of my life. I have grown as an individual and I have been able to affect many people."

We spoke with Kie'Ja via email September and October 2013.

Kie’Ja is a member of the Gaston Youth Connected Teen Action Council in Gaston County, North Carolina. She is a teen pregnancy prevention advocate and is proud of herself for teaching others how to take care of their bodies and health even though it can be difficult to do so. She is a 16 year old youth leader who cares about giving back to her community and being accountable for her actions.

Being an advocate for teen pregnancy prevention is an important part of my life. It all started while I was in a group called TOP (Teen Outreach Program) Teens, where we worked in the community and also became comfortable in our own skin. While I was a part of TOP Teens, I attended a meeting with the Teen Action Council (TAC) and helped plan flyers for the new Teen Wellness Center in Gastonia, North Carolina. After the TAC meeting, I was convinced that the TAC was something that I wanted to be a part of because they were making a difference in the community. A couple of my friends were also a part of TAC and that gave me even more reason to join.

Since becoming an advocate, I have grown as an individual. As a teen pregnancy prevention advocate, I have been able to affect many people. One of the events that TAC held was called K.I.S.S.E.D., which stood for Keeping It Sexually Safe Every Day. Our goal for that event was to inform teens on ways they can be sexually responsible. The event was held during sexual responsibility week, which is always the same week as Valentine’s Day. We were able to have an impact on many teens and it brought us joy.

Being an advocate changed my life and I am happy that I made the decision. It’s not only affecting my life, but it’s changing and helping others by making it possible for them to have better access to comprehensive sexual education. By having that knowledge, we all are able to make safer decisions regarding our sexual health. That’s the reason we were put into this world: to help others make their lives better.