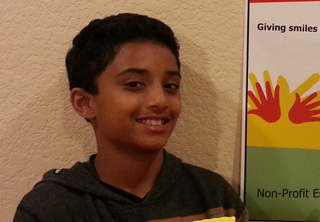 Martand: Bringing Smiles to Kids in Hospitals
“We want to inspire kids from the community to help and let everyone know they can be involved.”
We spoke with Martand via phone and email in May 2014.

Martand, 11, lives in California. In 2011, he began Kids and Smiles, a nonprofit organization with the goal of trying to bring smiles to kids in hospitals. Kids and Smiles brings hospitalized kids entertainment, such as toys, DVDs, or card games.

What inspired you to start Kids and Smiles?

I was inspired to begin Kids and Smiles when I was 8 years old because my parents wanted me to get involved with community work. I chose to help kids. I began volunteering with a nonprofit called Kids Who Care, which also goes to hospitals. Kids Who Care entertains kids by playing music or having a puppet show. When I made my first trip to the hospital, I noticed the kids did not have much to entertain them inside their rooms and did not have any visitors other than their families. I asked my parents if I could start my own nonprofit. Eventually, we were able to get the paperwork completed and Kids and Smiles became official.

Who do you turn to for support with leading Kids and Smiles?

My family helps a lot. We first began hosting events in our home. When we had people over for dinner, we would ask them to bring a toy for kids.

For example, in April, my mom, dad, sister, and grandparents all helped with a big Easter egg hunt event. I received a $500 grant for Global Youth Service Day from Youth Service America and Disney’s Friends for Change. About 70 people came, including the mayor. My 8-year-old sister filled eggs. My mom got us chairs, tables, and a microphone system. My dad went to Staples and picked up flyers, and he is also working on getting us business cards. My grandfather told his friends about the event, and he was in charge of food. My grandmother was in charge of decoration. Everyone chipped in. And in May, we gave about 50 toys to Miller Children’s and Women’s Hospital in Long Beach, CA.

Community organizations help a lot, too. One time, my sister’s Girl Scout troop held a toy drive. They collected the toys, and I took the toys to the hospital. Another time, my school book fair had a donation box for Kids and Smiles. My basketball team held a small event to help Kids and Smiles, and everyone pitched in with ideas.

In the future, we hope to have bigger events. We want to inspire kids from the community to help and let everyone know they can be involved.

What are your hopes for the future of Kids and Smiles?

Hopefully, Kids and Smiles has a bright future. Our hopes are huge. We want to have one more big event before the school year begins and possibly a small event as well. The next big step is planning a walk-a-thon or a “fun run” where participants bring toys as the entry fee to the activity. We also want to have a summer carnival in August where we people pay to participate by bringing a toy. The proceeds will be donated to Miller Children’s and Women’s Hospital and Loma Linda Hospital, which is located in Loma Linda, CA.