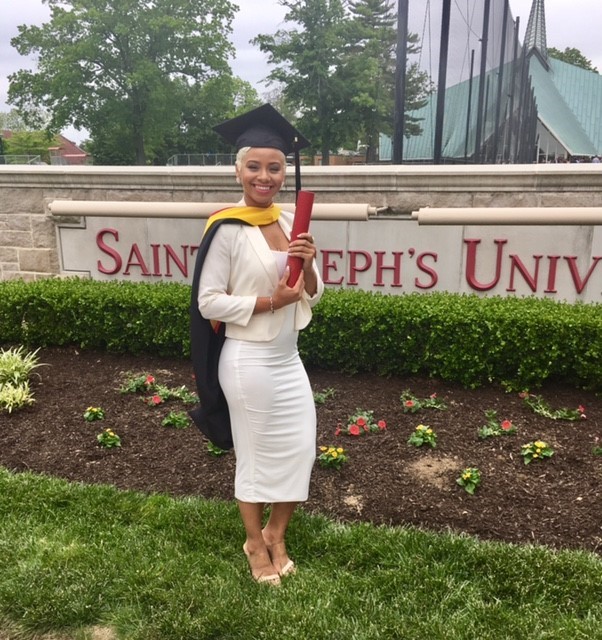 "You can use your struggles as your motivators to help the world become a better place to live."

We spoke with TENAJ via telephone and email in June 2017.

When she isn’t delivering life-changing workshops, Tenaj works as a Behavior Specialist Consultant serving children with mental health and behavioral challenges. She recently completed her master’s degree in criminal justice with a concentration in Applied Behavioral Analysis.

I survived a 3-year abusive relationship with a boyfriend in high school. I didn’t even know I was considered a victim, because I had started to normalize his behaviors, in part because I had witnessed my mother being abused by her ex-boyfriend. I really did not identify myself as a victim in the beginning, because I did not want to be viewed as weak and I did not want to believe something like domestic violence could happen to me.

I accepted that I was in an abusive relationship when I couldn’t hide his abusive behavior anymore. He and I got into a fight because another guy texted me. The fight happened right in front of my apartment building. He threw my phone into the woods and started to hit me. I ran away from him, and I damaged his car. The fight escalated and drew a lot of attention from my neighbors. I even had an asthma attack. An ambulance and the police showed up to help me. I realized that I could lose my life from that relationship. At that point, everything was out in the open. His dad and my mom finally knew what was happening in our relationship.

My mom recommended therapy. I went once. I told my ex-boyfriend about it. He got upset about me going to therapy and punched me in the face, causing a black eye. I was too afraid to go back to therapy. I found it hard to leave the situation, because he would threaten to hurt me or to hurt himself. I definitely had an emotional attachment to him. I loved him before he became an abuser, and I thought I still loved him.

One day I was looking at my selfies and reflecting on how I was being treated, and on how I saw my mom being treated when she was in an abusive relationship. I had a selfie of us; I was smiling with a black eye. Seeing that picture was really significant. I started to question if I was really happy. I realized that I wasn’t. I also noticed that I had lost all of my friends, had a poor relationship with my mom, and had started doing poorly in school. I was even skipping school — just being rebellious. I knew I was a victim when I realized that I had lost control of my life.

I eventually ended the relationship by going to court and getting a restraining order against him. I didn’t talk to anyone about it for a long time, but I started to work on healing from the trauma. I started playing field hockey again. I developed a better relationship with my mom. I focused on self-care by doing things that made me happy and free. Taking these steps helped me regain my confidence and my self-esteem.

[Are you in an abusive relationship? Get help here.]

When I went to my freshman orientation at Wesley College, I remember being told that students could create a program on campus and possibly get funded by student government. By that time, I was already very passionate about preventing domestic violence. I thought alone about my idea for Light to Life for a while. Eventually, I recruited classmates to serve as the vice president, treasurer, and secretary. I knew it was something that I could offer and that it could help change people’s lives for the better. We started out as an affiliate to a local non-profit before deciding to be an independent organization focused on serving students at Wesley. Helping other people helped me, too. When I started working with other students who had experienced domestic violence, I realized that I really needed help too. That’s when I started seeing a therapist on a weekly basis.

When Light to Life started, we offered biweekly workshops. About 12-20 people attended each workshop. We hosted fundraisers and dances. More than 60 people attended one of our dances. We donated the money raised from that dance to a homeless shelter. We were invited by Delaware State University Resident Life to provide a few workshops on their campus.

When I graduated from Wesley in 2014, I passed leadership of Light to Life on to my vice president. She continued the program for another year before deciding to focus more on school. Even though the program was discontinued on campus, some professors, coaches, and others have reached out to me to learn more about Light to Life and share it as an inspiration to educate and encourage incoming students to take advantage of leadership opportunities available on campus.

In 2017, I started getting back on track with the program, by holding Philadelphia-based workshops focusing on empowering youth and advocating for funding to continue domestic violence prevention programs. I was nominated to speak at a candle light service for Victim Rights Awareness Week in April and had the opportunity to speak to victims of trauma at a victim empowerment program in Philadelphia.

Five years from now, I see myself as a board certified behavior analyst who specializes in Cognitive Behavioral Therapy. I see Light to Life offering mobile therapy as a way to proactively reach out to victims of domestic violence. Traditionally, victims of any type of trauma don’t seek services themselves. I see myself continuing to help people — raising awareness and changing people’s lives. I just want to support and help individuals who have had similar experiences.

I have learned that life is about perspective. Ultimately, at the end of the day, whether you view a situation as positive or negative, it is up to you. Looking at your painful experiences as positive is a hard choice. But in the end, doing this may be most valuable, because this perspective can make you a happier person. I’m a strong believer that everything happens for a reason. Believe it or not, you are a product of your experiences, but you can [still] change things for the better. You can use your struggles as your motivators to be a better you and to help the world become a better place to live. Power is within and is therefore under your control. You are the designer of your destiny.

Dating abuse is about power and control. If you feel trapped in an abusive relationship, you can take back control by calling the National Dating Abuse Helpline at 1.866.331.9474 and getting connected with a peer advocate for help and resources in your area.

Knowing the difference between healthy and unhealthy relationships is important. Learn about behaviors and types of violence that you should treat as serious warning signs in relationships.

This free online course features interviews with leading experts, dynamic graphics and exercises, and compelling storytelling to describe what teen dating violence is and how to prevent it.

Watch The Halls web series and follow Justin, Quincy, and Tyler, three young men living in Boston, as they struggle with issues related to relationships, trauma, violence, and their own identities. When a student at their school is raped, the teens are forced to face questions about gender-based violence and how we should act in relationships.