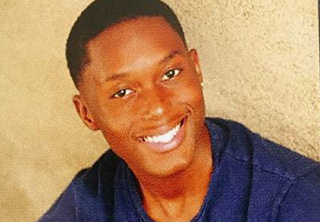 "To youth out there who feel like they are trapped or hopeless, you are not alone. Understand that you have a purpose in life."

We spoke with Zachary via email in April and May 2016.

Zachary D., 18, is a freshman majoring in Computer Science at Dutchess Community College. Based on his experiences with trauma and mental illness, he was inspired to create a mobile app that will provide anonymous digital counseling to youth who are struggling with mental health problems.

I want to take you on a journey with a kid who believes there is an opportunity for anyone who is willing to take it. I was quite meticulous as a child, and I still am. Although I analyze my surroundings very carefully, I usually take a nonchalant approach to most situations. However, an array of traumatic events at a rather young age challenged that mindset. I realized that there was something different about my life. I wasn’t sure what it was, but I knew everyone else around me wasn’t having the same experiences as I was.

When I was about three, I lived in an apartment in the Bronx with my mother, father, younger sister, and older brother. My older brother and I had the same mother but different fathers. Unfortunately, I didn’t get to spend a lot of time with my brother, as our lives were about to change drastically. It’s strange, because most people will tell you that it’s almost impossible to recall an event that took place when you were that young. However, I remember that day very clearly. I remember watching my mother cry inconsolably while she was trying to explain to me the best that she could, that my big brother went to heaven.

Things got worse. My father left when I was four years old. It was as though he vanished into thin air. He just left everything. I wouldn’t see my father again until I was 15. Since he bailed out on us, we couldn’t afford the rent. So, we moved from place to place, until we were finally placed in a housing project. It wasn’t a very good area; there was a lot of violence and drug dealing. For this reason, I was never allowed to hang around outside without my mother.

By now, my mother’s health was deteriorating, and I was slowly being positioned into the role of man of the house. There were times where I had to take care of my mother because of her health, and my sister because she was still very young. My mother eventually was admitted to the hospital. I remember visits that began in the afternoon and lasted until the sun rose the next day. I began to wonder, is this what my life is supposed to be like? Will it always just be my mother, sister, and I struggling to make ends meet? Over time it became clear that my mother’s health was further declining. My mother would call my sister and me and ask us the same questions over and over again: “Zachary, where are you”; “where am I”?

On August 27, 2012, I knew something wasn’t right. I was staying with my aunt and uncle at the time. It was my aunt’s birthday, but she was crying, so I was confused. My uncle called my sister and me into the living room and told us that our mom had passed away a few hours before. At that moment, I felt numb—like I was having a bad dream. I sat in silence as everyone wept around me. Starting then, I began to experience anxiety and depression. I felt like I was trapped inside a dark, thunderous storm cloud with seemingly no way out. Eventually, I was able to control my symptoms with help from my family and doctors, including counseling and correct medication. But I don’t want anyone to experience the mental state that I was in after the loss of my mother.

My goal is for counseling to be available to all youth when they need it the most. My experiences have driven me to be a strong advocate for mental health. To youth out there who feel like they are trapped or hopeless, you are not alone. Understand that you have a purpose in life. Accepting your mental condition is the first and most important step along the road to recovery. Talk about it. Express yourself. Be who you, are and know that there is light at the end of the tunnel.