National Drug Facts Week (NDFW) is a health observance week for teens that aims to shatter the myths about drugs and drug abuse. Through community-based educational events and activities, the National Institute on Drug Abuse (NIDA), part of the National Institutes of Health (NIH), launched the fourth annual NDFW in 2014 to reach teens and their intermediaries with science-based information about the harmful effects and consequences of drug use on the brain, body, and behavior. The 2014 NDFW, which was held January 27 to February 2, experienced the largest participation to date.

Thank You for Your Participation in National Drug Facts Week 2014!

Educational events and activities brought the scientific facts about addiction directly to teens. In 2014, NIDA doubled the number of NDFW events to 1,084 in 50 states and increased the number of event holders to 449, which was 34 percent more than in 2013. 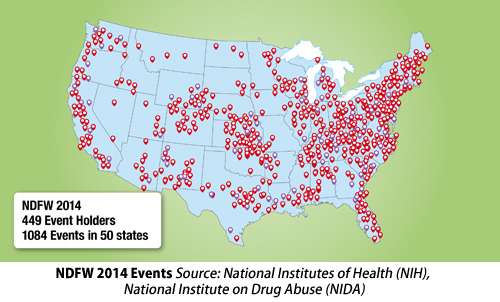 Schools and after-school programs made up nearly half of all 2014 NDFW planners, engaging students throughout the week. Additionally, community-based coalitions and programs, youth leadership groups and clubs, behavioral health providers, and colleges and universities were champions of 2014 NDFW activities and events.

Tweets, Facebook statuses, e-mails, blogs, and websites were updated to help spread the word about 2014 NDFW. From 2013 to 2014, overall social media impressions increased by 123 percent, including 20,600 Twitter followers for @NIDANews and 12,428 likes on the NDFW Facebook page.

Six songs by teen musicians were chosen in the 2014 GRAMMY Foundation® and MusiCares® Teens! Make Music Contest and are featured online. The contest requested young aspiring musicians, ages 14 to 18, to create an original song and/or music video that celebrated a healthy and inspirational lifestyle or accurately depicted a story about the dangers of drug abuse.

Resources to Support Youth and Families During the Coronavirus COVID-19 Outbreak
Sharp Increase in E-Cigarette Use among Youth over Past Year
Just Launched! Redesigned YE4C
Adolescent Substance Use, Addiction, and Treatment: A TAG Talk
The Power of the Adolescent Brain: A TAG Talk