Report Shows Majority of Americans Civically Engaged in Their Communities

(Washington, D.C., September 15, 2011) — Between 2008 and 2010, a majority of Americans were civically active in a variety of ways, working with others to improve their communities, according to the 2011 Civic Life in America: Key Findings on the Civic Health of the Nation research released today by AmeriCorps (formerly the Corporation for National and Community Service) and the National Conference on Citizenship (NCoC).

With nearly nine in 10 American households sitting down to dinner together frequently, more than half discussing politics at least a few times a month, and a third actively participating in groups or organizations, civic life in America continues to be dynamic.

In partnership with CNCS and NCoC, the Bureau of Labor Statistics and the U.S. Census Bureau collect most of the data for Civic Life in America through supplements to the Current Population Survey (CPS).  The CPS Civic Engagement Supplement   is designed to gauge the health of America’s communities by measuring how often residents engage in a variety of civic activities. The survey also helps civic leaders identify ways to strengthen the participation of citizens in making a positive impact in their communities. 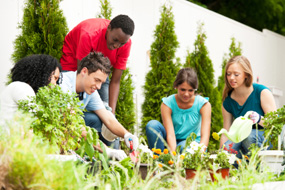 A majority of Americans participated in many of the activities contained in three of the five civic engagement categories measured in the report: political action, connecting to information/current events, and social connectedness. More than a third were active across several of the activities in the remaining two categories: service and volunteering and participating in an organized group.

“Today our nation faces a number of tough challenges,” said Robert Velasco II, CNCS’ acting CEO. “The Civic Life in America research demonstrates that Americans across the country and at all stages of their lives continue to stand up to help solve problems in their own communities, from providing job training to veterans and tutoring at-risk students to helping neighbors recover from disasters.”

The research suggests that civic engagement is a reinforcing cycle.  Citizens who participate in one area of civic engagement, like volunteering, are more likely to get involved in groups, contact public officials, or work with neighbors. In addition, the results show evidence similar to what researchers see across the “volunteer lifecycle”—the arc of civic involvement that tends to increase as citizens feel a deeper connection to their communities through personal networks, their workplace, and their children’s schools.

“Civic engagement is an important component of American society and everyone can make a contribution to address our country’s challenges,” said David B. Smith, NCoC’s executive director. “This data helps us discover the ways people are already involved, as well as explore opportunities to increase and sustain new and diverse types of engagement. This allows us to make data-informed decisions and build tools that provide solutions.”

Other key findings include:

Between 2008 and 2010, a majority of Americans were connected to their communities.

Americans remain civically engaged long into their lives in a pivotal number of ways between 2008 and 2010.

The Internet continues to grow as an integral part of everyday civic life, with Millennials leading the way, but Generation X and Baby Boomers close behind.

“Of particular interest in this year’s findings is that the online world is becoming equally important to people as the offline world—and it’s going to continue to impact the way Americans get involved in civic life,” concluded Velasco. “We’ve seen that people who stay in touch regularly with friends and family, even online, and with their neighbors are also more likely to be involved in a variety of community activities.  That gives civic leaders an opportunity to engage people through technology to meet community needs.”

In addition, the research also provides data on civic participation on the national level, all 50 states and the District of Columbia, and 51 of the largest metro areas in the U.S. The rankings of the cities and states were based on five major categories:  political action; connecting to information/current events; social connectedness; service; and participating in a group.

To help more Americans find ways to get engaged in civic life, AmeriCorps has developed online resources, including a training and technical assistance package outlining ways in which individuals and groups can work together to enhance civic life in their communities.

About Civic Life in America: Key Findings on the Civic Health of the Nation

Civic Life in America is an annual assessment detailing the many ways people get involved in communities across the country and work to make a difference. Data for the U.S., regions, state, and city (metropolitan area) level were collected primarily through the Bureau of Labor Statistics and the U.S. Census Bureau. More information can be found at http://www.serve.gov.

About National Conference on Citizenship

At the National Conference on Citizenship (NCoC), we believe everyone has the power to make a difference in how their community and country thrive. We are a dynamic, non-partisan nonprofit working at the forefront of our nation’s civic life. We continuously explore what shapes today’s citizenry, define the evolving role of the individual in our democracy, and uncover ways to motivate greater participation. Through our events, research, and reports, NCoC expands our nation’s contemporary understanding of what it means to be a citizen. For more information, visit NCoC.net.