Although definitions of school climate vary, a comprehensive Safe Supportive Schools measurement model developed by the U.S. Department of Education, based on listening sessions and consultation with researchers and practitioners, reflects the most common concepts. This model includes three main components of school climate: Engagement, Safety, and Environment. The figure below1 illustrates an adapted version of this model—its components and topical areas under each—adapted from the website of the National Center on Safe Supportive Learning Environments (http://safesupportivelearning.ed.gov/school-climate). For more information on the importance of school climate, view a recorded webinar. 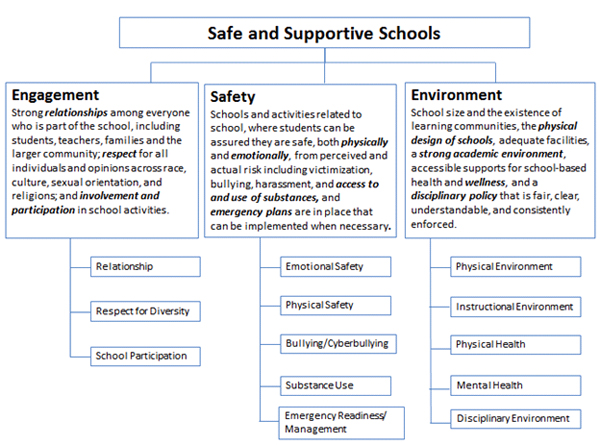 School connectedness—students’ perceptions of safety, belonging, respect, and feeling cared for at school—appears to play a particularly important role in healthy adolescent development. It has been found to provide protection against almost every health risk behavior measured, including substance use, risky sexual behavior, violence, and emotional distress.2 Further, data on connectedness suggest that the more social domains in which adolescents experience connectedness, the less emotional distress and fewer symptoms of depression, anxiety, and stress they will experience.3

Connectedness to school has also been shown to be a significant predictor of higher academic achievement among youth,4 including sexual minority youth.5 Analysis of data from the National Education Longitudinal Study shows that supportive, caring relationships between students and teachers, as well as teachers’ positive perceptions of students’ efforts in the classroom, resulted in higher academic achievement for students.6 Participation in extracurricular activities has been shown to be associated with positive academic, psychological, and behavioral outcomes and civic engagement.7

The importance of relationships was also reflected in student, staff, and family data collected through the Safe and Supportive Schools (S3) state grants, which identified support for improving student-student, student-adult, and adult-adult relationships as the highest need across the participating local education agency sites in both 2011 and 2012.8 The positive effect of connection and relationships can also be seen among lesbian, gay, bisexual, and transgender (LGBT) students, who have been shown to be less likely to be truant from school if they have a trusted adult at school with whom they can talk about their sexuality.9 Learn more about what schools can do to help LGBT students.

Student safety includes feeling safe physically and emotionally from factors such as violence and teen dating violence, bullying and cyber bullying, and substance use. It also includes feeling safe as a result of emergency management plans in place. Students’ perceptions of feeling, or not feeling, safe at school have been shown to have an impact on their educational outcomes. School environments characterized by victimization and hostility are linked to lower levels of engagement and achievement in mathematics and reading,10 and personal experiences with threats, theft, or assault at school have been shown to increase students’ likelihood of dropping out.11 Negative outcomes are pronounced for students who are victims of bullying because these students have been shown to have lower academic achievement than their nonbullied peers. Victims of bullying, as well as bullies themselves, also report feeling unsafe at school at a higher rate than other students.12

Recent data show that students reported a higher level of fear of an attack or harm at school (4 percent) than off school property (2 percent) during the school year,13 and about 6 percent of students reported that they avoided school at least once during the previous month because they felt unsafe at or on their way to school.14 These feelings are often exacerbated for LGBT youth and youth with physical, intellectual, or developmental disabilities. These youth are more likely to face physical and emotional abuse, bullying, and physical assault because of their sexual identity, gender identity/expression, or disability.15 For example, data from a 2011 report show that 63.5 percent of LGBT youth felt unsafe from victimization at school because of their sexual orientation and 43.9 percent felt unsafe because of their gender expression.16

The use and sale of substances at school have also been linked to negative educational outcomes for students. A study conducted by the California Department of Education found that schools reporting a large percentage of students who stated they had been intoxicated or offered drugs on school property exhibited lower scores on academic achievement than other schools whose students did not report these experiences.17

National Center on Safe Supportive Learning Environments
The National Center on Safe Supportive Learning Environments (NCSSLE) is funded by the U.S. Department of Education’s Office of Safe and Healthy Students. NCSSLE provides resources, training, and technical assistance on school climate and its components to states, grantees, district administrators, schools, teachers and staff, families, and students. The NCSSLE website highlights the most up to date and seminal research on school climate and provides links to related products, tools, and websites.

StopBullying.gov
StopBullying.gov represents a multiagency federal effort to better understand the issue of bullying and how to prevent and respond to it. In addition to the resources provided for parents and other community members, StopBullying.gov features information to help schools educate students and staff about bullying and implement policies that create an environment of safety.

Office of Safe and Healthy Students
The U.S. Department of Education’s Office of Safe and Healthy Students (OSHS) funds and promotes initiatives, research, and publications on education, health, mental health, safety, and drug and violence prevention. The OSHS website provides an overview of the programs, initiatives, and technical assistance centers administered by OSHS and highlights relevant events, reports, websites, publications, and other available resources.

This webpage from the Centers for Disease Control and Prevention (CDC) provides a definition of and information on school connectedness and why it is so important.

Indicators of School Crime and Safety: 2014
Whole School, Whole Community, Whole Child Model
The Relationship Between Bullying and Suicide: What We Know and What It Means for Schools