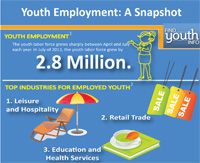 Click to Enlarge The current economic climate has made securing and sustaining a job difficult for all Americans, including youth. Certain populations of youth—including those who are or have been involved in the foster care system or the juvenile justice system, runaway or homeless youth, youth who have dropped out of high school, pregnant or parenting youth, and youth with disabilities—have additional challenges in getting early work experience. These youth often face increased barriers to employment, such as lack of documentation, transportation, child care, or support. They may have a transient lifestyle or have to overcome stigma, mental illness, substance abuse, previous felonies, or a juvenile record. Despite the challenges, most young people have held a job by the time they are 25,1 with many seeking employment during summer months. In 2013, more than half (50.7 percent2) of young people between the ages of 16 and 24 were employed between April and July, an increase of 2.1 million youth for the same period in 2012.3

To find the most recent data on youth employment and unemployment, visit the data sources below.

YE4C Accepting Applications for the Editorial Board
New Toolkit on Education & Careers for Youth on YE4C
Just Launched! Redesigned YE4C

Report: High School Students’ Views on Who Influences Their Thinking about Education and Careers
Report: Participation in High School Career and Technical Education and Postsecondary Enrollment
Resource: Mythbuster! WIOA Titles I and II