Some children and youth become involved with the juvenile justice system because they are accused of committing a delinquent or criminal act. Other youth come into contact with the system for status offenses—actions that are illegal only because of a youth’s age—such as truancy, underage drinking, and running away from home. Not all of these cases, however, are formally processed through the courts.

What do we know about youth involved in the juvenile justice system?

Figure 1: Percent of Juvenile Court Involvement Charges by Type for Youth Between the Ages of 12 and 17 in 2008 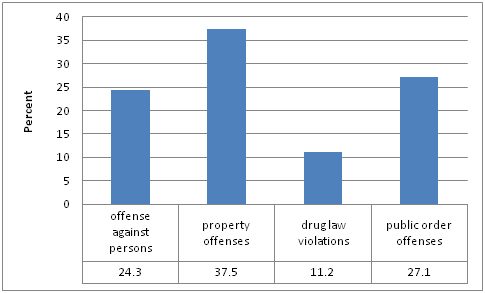 The majority of youth processed through the juvenile court are adjudicated (i.e., declared by a judge to be) delinquent, for most offenses.

Considerable variability by gender and deep disparities by race and ethnicity exist in both pre-adjudication detention and post-adjudication residential placement.

Recidivism,10as measured by various levels of reinvolvement with the justice system (e.g., rearrest, probation violations, reincarceration, etc.), is fairly high for youth under the age of 21. Based on studies of juveniles released from state incarceration, rearrest rates were substantially higher than other measures of recidivism. Across studies with a 12-month follow-up period, the average rate of rearrest for a delinquent or criminal offense was 55 percent, the average reconviction or readjudication rate was 33 percent, and the average reincarceration or reconfinement rate was 24 percent.11

Youth involved with the juvenile justice system often have mental health and/or substance abuse problems. These typically affect their academic performance, behavior, and relationships with peers and adults.