In 2019 the American Institutes for Research (AIR) issued a Call for Manuscript Proposals for work on an initiative funded under a contract issued by the Office of the Assistant Secretary for Planning and Evaluation (ASPE) to support the work of the Interagency Working Group on Youth Programs (IWGYP). The specific focus of this call for manuscript proposals was on topics related to adolescent and young adult decision-making especially with regard to recognized risk behaviors and the implications of this decision-making for decisions about family planning, healthy relationships, sexual activity and general reproductive health.

The following infographic summarizes the manuscripts completed through this call for proposals. The manuscripts are categorized into three areas related to sexual decision-making: family relationships; community and environmental influences; and adverse childhood experiences, mental health, and emotional regulation. Click on the red, yellow, and blue circles below to read the abstracts of the research conducted for each category in response to the Call for Manuscripts. 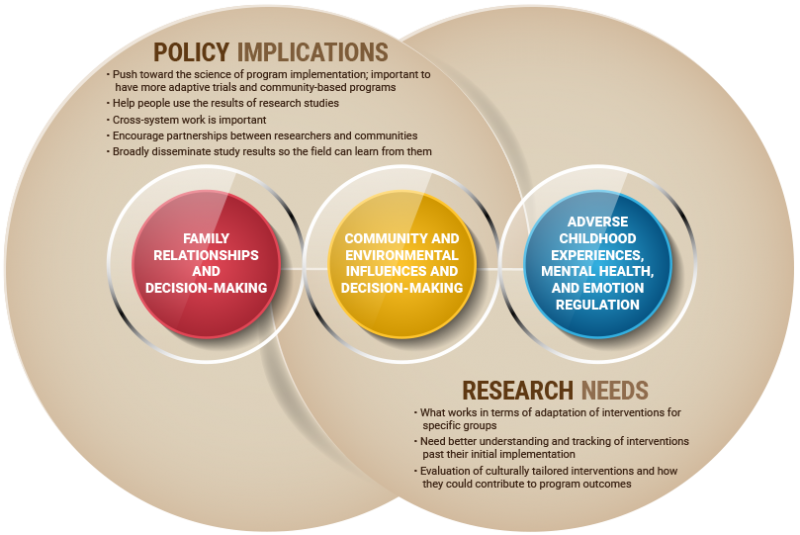 This study examined whether changes in goal orientation (e.g., future aspirations, decision-making, goal setting) or social supports would contribute to the positive effects of the federally-funded Title XX Adolescent Family Life Program, which aimed to prevent repeat teen pregnancies. While the study looked at the potential effects of orientation to goals and social supports on repeat teen pregnancies and the use of long-acting, reversible contraception (LARC), it did not find that either had any significant program effects. However, it did find that receiving support from the participant’s father was associated with higher LARC use. Associations between support from the child’s father and LARC use may reflect that teens in stable, long-term relationships were more likely to choose long-acting methods of contraception.

COMMUNITY AND ENVIRONMENTAL INFLUENCES AND DECISION-MAKING

Maness, S., & Thompson, E. L. (2019). Associations between social determinants of health and adolescent contraceptive use: An analysis from the National Survey of Family Growth.

This study analyzed data from the 2015 National Survey of Family Growth and focused on sexually active males and females between ages 15 and 19. The main goal of this work was to increase understanding of sexual activity, teen births, and unintended pregnancy in adolescence by looking at social determinants of health that are linked to contraceptive use. Social determinants of health used in this study focused on domains such as economic stability (e.g., poverty, employment, food security), neighborhood and built environment, education (e.g., received high school diploma/GED), social and community context (e.g., family structure), and health and healthcare (e.g., access to healthcare). This study found high contraceptive use among participants at last sexual intercourse. The study found one link between contraceptive use and family structure, with significantly higher odds of using contraception at last sexual intercourse association for youth who had lived with the two biological or adoptive parents since birth. However, the study found low rates (4.5%) of participants using highly effective contraceptives to prevent pregnancy (i.e., IUD, implant). There were no significant relationships between social determinants and using highly effective contraception.

None of the groups were characterized by consistent condom use, putting the adolescents at risk for sexually transmitted diseases. Patterns that included behaviors usually associated with risk for adverse outcomes (e.g., multiple sex partners, sex while intoxicated) were more common among youth in the South Bronx, males, and youth who experienced greater Adverse Childhood Experiences (ACEs) related to child maltreatment and exposure to violence. Compared to youth in Puerto Rico, those in South Bronx were more likely to be in the single partner, sex without condoms class. Higher child maltreatment/violence ACEs scores also increased the odds of being in the single partner, low activity class, perhaps indicating an avoidance to sexual activity. Differences in youth’s patterns of sexual risk behaviors between youth living in the South Bronx and youth living in Puerto Rico were not explained by ACEs.

This study examined whether the evidence-based program IMARA, which is a group-based mother-daughter intervention designed to address the interrelated issues of mental health and sexual risk taking among African-American adolescent girls. This study specifically looked at whether the improvement of girls’ mental health would contribute to the protective effect of this program in preventing future sexually transmitted infection (STI). Participants received either the IMARA program or a control program that focused on health promotion (e.g., nutrition, exercise, violence prevention). The IMARA program was designed to address several factors that can lead to STI risk, including mental health problems. For example, mothers and daughters engaged in a “feelings thermometer” exercise where they learned to identify the effects of their own “hot” (i.e., very strong) emotions on their decision-making and risk behaviors. Daughters then developed personalized plans to bring “hot” emotions into the “cool” (i.e., less intense) zone. Results showed that participants who entered the program with high externalizing symptoms (e.g., aggression, poor impulse control) and who received the IMARA program, showed significantly reduced symptoms at their 6-month follow up and these participant results were still present at the one-year follow up. However, in this study the results did not show any impact of the IMARA program on internalizing behaviors (e.g., anxiety, depression). Among girls with a high baseline of externalizing symptoms who provided STI data, the risk of contracting a new STI by 12 months was on average 42% lower for those who participated in IMARA than the control group. This study provides valuable preliminary evidence for linking the potential of improving externalizing symptoms as a way to promote STI prevention.

This study examined the relationship between perceived community violence — including fear of and witnessing violence — and sexual activity (including condom use) among teenagers in Baltimore, Maryland. The data from these analyses came from the Well-Being of Adolescents in Vulnerable Environments (WAVE) Study, which sought to understand the health and determinants of health among urban adolescents ages 15 to 19 living in low-income neighborhoods. While experiencing community-level violence in Baltimore is common for adolescents, the types of exposures to community violence are diverse and go beyond just direct victimization (i.e., directly experiencing an act of violence) to include fear of violence and witnessing violence. In this study, it was found that girls who reported a fear of violence and having witnessed violence were significantly more likely to engage in sexual intercourse over the last year, and those who were victimized were more likely to have used condoms. Boys who reported a fear of violence were less likely to have engaged in sexual activity whereas boys who witnessed violence were more likely to have engaged in sexual intercourse and where also less likely to have used condoms. Fear of violence seems to have a role distinct from witnessing violence or experiencing direct victimization. The results suggest that exposures to different forms of violence are related to unprotected intercourse and may put adolescents at risk for negative sexual health outcomes.

This study examined whether individual and cumulative ACEs (adverse childhood experiences) increased the risk of unhealthy sexual behaviors and adolescent pregnancy. Participants included 9th and 11th grade students who completed the 2016 Minnesota Student Survey. The six ACEs studies were: psychological abuse, physical abuse, sexual abuse, parent or other household member substance abuse, witnessing intimate partner violence, and incarcerated parent or household member. In the sample, 65 percent of the students reported experiencing zero ACEs, 19 percent reported experiencing one ACE, 9 percent reported experiencing two ACEs, and 7 percent reported experiencing three or more ACEs. The study found that, for each category of adverse childhood experience, adolescents who had experienced that ACE were more likely than those who did not experience that ACE to initiate sex, have multiple sex partners, unprotected sex, and be involved in a pregnancy. Experiencing sexual abuse was most strongly associated with reporting sexual risk behaviors or pregnancy. Different youth assets, including self-regulation skills, connectedness to school, not skipping school, and academic performance, were linked to participants being less likely to initiate sexual activity and less likely to report sexual risk-taking. They served as important mechanisms in reducing the negative effects of ACEs on sexual initiation and adolescent pregnancy. These study results suggest that programs that focus on strengthening adolescent’s self-regulation, encouraging school connectedness, improving school engagement and performance may lessen the strong impact of ACEs on adolescent sexual risk behaviors and pregnancy.